A short ride along and near the Danube to the village of Devin which is located at the confluence of the Danube and Morava Rivers. Above Devin is the ruins of a castle. This site has evidence of human habitation going back to 5000 BC and including the Romans.

My bike is parked against a preserved section of the Iron Curtain – here it is a high barbed wire fence. The bike path is a section of Eurovelo 13 – the Iron Curtain route. This section is along the Morava river which separates Slovakia and Austria. In the background is one of a string of bunkers which were never used but caused the Nazis to annex the Slovak side of the river before WW2. This section of EV13 was likely a former border patrol road. The bridge is a newish ped cycling bridge crossing the river between Slovakia and Austria. Not too long ago, this area was a no go zone and a person would be shot if attempting to cross the river. Now it is all about the joy of cycling

Lots of nice rest stops along the way

Followed EuroVelo 13 mostly along dike-top paths. Starting at Devin, there ate lots of information boards along the route – one every km or two. The boards contain lots of local and historical information -this one is about bats.

After skirting through a small corner of Austria near Hohenou, we went along a portion of EuroVelo 9 to Breklav and ended our day in Lednice in the Czech Republic. 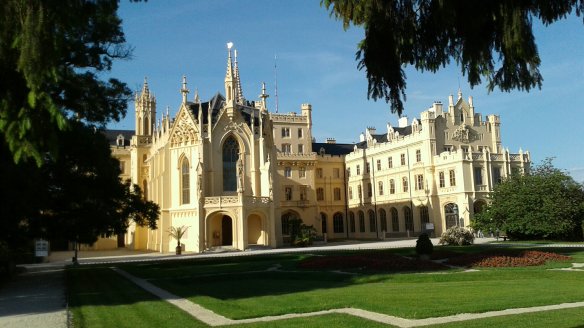 June 9 – to Lednice to Hevlin

Checked out historic John’s Castle. Followed combined EuroVelo 9 and 13 part of the way. Also went along a section of the Vienna-Prague Greenway. Here is a movie of a superb section of the route. It was doubly good since we had a strong tailwind.

Came across an interesting sculpture commemorating those who died while attempting to cross the Iron Curtain. 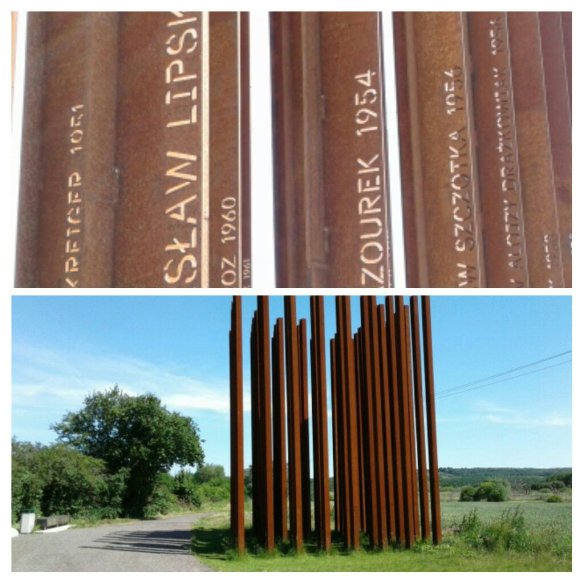 Later we saw an info board listing names as well. I find it fascinating that this border area which caused no much conflict and misery in the past now has a delightful cycling route which brings people together instead of a barbed wire fence to keep people apart

June 10 – Hevlin to  Znojmo
Followed EuroVelo 13 most of the way.  Paved farm roads and a short section of dirt farm path.

Znojmo has a nice central square