We started out by taking a delightful path through a national park. End of route was on a busier highway which was remarkably wide. Nice castle at picturesque destination.

Rode mostly on quiet country roads but also a short section of narrow and busy highway. Realised later that there was a parallel bike route. Telc has a lovely castle and pictureque square.

We took the train from Telc to Slavonice since we had cycled most of the route the previous day. We then cycled mostly on the Prague-Vienna Greenway route. We then chose Czech regional route 322 to Chlum U Trebone and then completed the day by riding on Czech national route 122. Portions of our route were on excellent paths – some to cycling highway standard. Other portions were very rough. Here is a movie of one of the good sections:

Trebon is a beautiful little town

Explored Trebon in the morning. Very nice car free square. Note all the bikes parked in the middle of the square.

On the way out of Trebon we came across a bike safety training facility. A fellow came over and explained that all students in Czech Republic receive such training at age 10 and receive a cycling license after successful completion of the course. I saw a similar facility like this in Germany a few years ago. Why don’t we have a program like this across Canada?

Rode all the way to Ceske Budejovice on national cycling route 122. Varied levels of quality but much of it was  car-free. Stopped for a look around Ceske Budejovice, then took train to Cesky Krumlov.

Many agree that this is one of the prettiest towns in the Czech Republic. It is indeed quite beautiful but also very crowded with tourists.

I am writing this post while sitting in a park. A nearby bird is singing away:  Bird song in park in CZ

We now come across EuroVelo 7 – the international route which extends between Malta and the northern part of Norway. We rode on EV7 the entire day. Most of the route through the city of Ceske Budejovice is on delightful riverside paths.

Another day, another castle… Along the way, we stopped at the castle in Hluboka nad Vitavou.

Rest of route was mostly along nicely paved riverside paths which extended to the centre of Tyn nad Vltavou. Here is an example:

The quality of the cycling infrastructure that we have encountered in CZ is way beyond my expectations. So many delightful off road paved paths!

We heard that the cycling route from here to Prague was very hilly and not too interesting, so we cycled 16 km to a train station in Bechyne to catch a train to Prague. Mostly good cycling but a few km were on a rough dirt path beside a river. We followed regional cycling route 1039.

Village of Bechyne as see from railway bridge

Funky local train to Tabor followed by excellent regional train to Prague. They do make it easy to take one’s bike on the train.

We stayed in a small hotel in the south part of town. Took metro to town centre – very nice metro system. City is quite impressive but teeming with tourists. Got some escape from the crowds in St Nicholas Cathedral and in the Castle garden. Now I know where Santa originated! 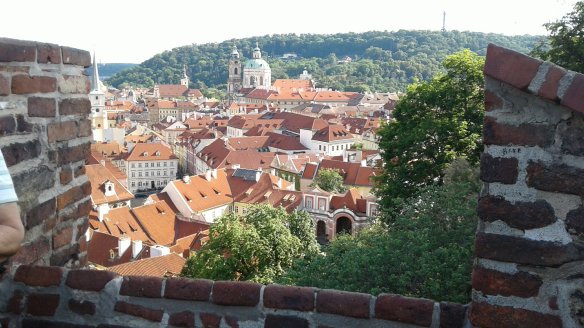