Another cool day, also cloudy. On the way we met a young woman who was from Dresden and now living in Montreal.  She gave us some of the horrific details of the fire bombing of Dresden at the end of WWII. Torgau was at the centre of the reformation movement in the 16th century which featured Martin Luther. Very nice castle as well as a church which dates back to the 13th centuy.  Lots of history here.

Passed through lots of little villages and farm fields. Rode through a light thunderstorm and put on some rain gear for the only the second time this trip. We did have about 5 km of fairly busy highway but most of route was off road paths or along quiet roads.

Lutherstadt Wittenberg is a pretty town with a castle and two very large churches. They are currently hosting a large exposition to celebrate the 500th anniversary of the reformation.

We now leave the high quality Elberadweg (Elbe bike route). Heading north, we followed gravel paths and roads for about 10 km – a marked drop in quality from the Elbe route. At a state boundary, conditions improved and we were treated to paved paths most of the way to Bad Belzig. Here is an interesting situation where a paved cycle path was constructed beside a gravel road (which I assume is a forest service road). 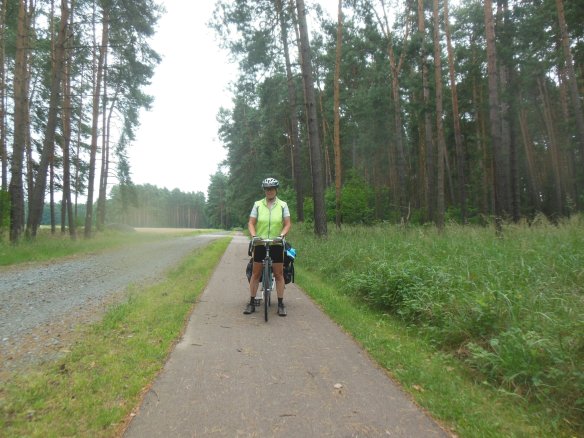 This makes a lot of sense, but one would be hard pressed to find something like this in Canada.

Due to start of heavy rain and long distance remaining, we decided to take a train to Potsdam.  We were surprised that our scheduled train was cancelled due to technical difficulties and we had to wait an additional hour for the next train. We were doubly surprised that the messages and announcements of the technical difficulties were very misleading and caused us further delay. Note, however, that rail service in most of Europe is for the most part exceptionally good, especially when compared to Canada. If we missed a Via train in Vancouver, we would have to wait 2 or 3 days for the nect one. Also, there are almost always special spots for bikes on most regional European trains.

We started the day by exploring Potsdam. We first visited a Dutch style street which was created by Flemish peole who moved there in the 1730s. Next we explored a small portion of the very expansive Sanssouci Palace grounds which includes many buildings (and a windmill!) and vast gardens. Then rode down a car free street (why don’t we have these in Canada?) and finally the ostentatious square. 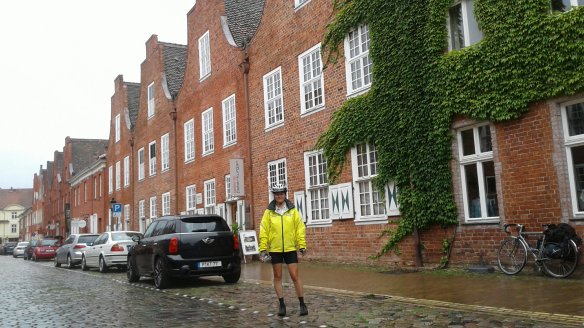 Our ride into Berlin was mostly follewing the EuroVelo 7 route. It started off in a wide “Fahradstrasse” – a street where cars are allowed but may not pass bikes. Then wide bike lanes. One section was on a rough paved path though there was the option to ride on the wide-ish 30 k/h street which we soon chose.  After this, there was a mix of bike facilities including a narrow one-way bike path marked on the sidewalk. This worked quite well as long as there were not cars parked immediately beside or even intruding into the path. 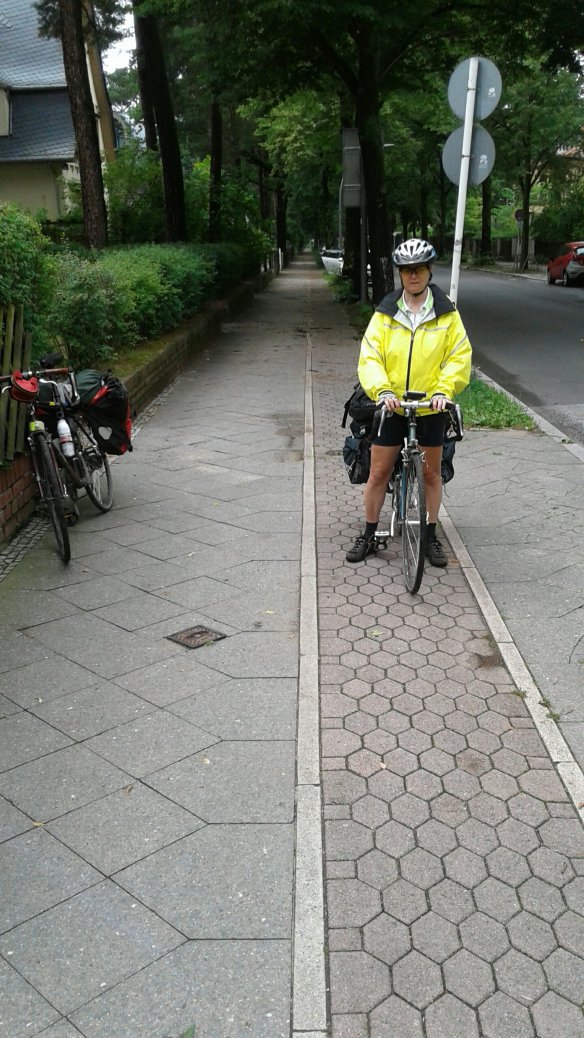 Took the S-Bahn (metro) to Brandenburg gate. Then went to the Memorial to the Murdered Jews of Europe. This is a massive but quite abstract memorial which covers 19,000 square metres. The information exhibit meant more to me since it provided detailed information of the holocaust.  It is very difficult to understand how fellow human beings could devise such a massive genocide and also how so many could participate in this horrendous undertaking.  This memorial was particularly meaningful to me since my parents sheltered 5 Jewish people in their farmhouse in the Netherlands during WWII   Over 100,000 Dutch Jews were not so lucky.

Memorial to the Murdered Jews of Europe.

We spent the rest of the day exploing Berlin.

Next section is Bike Tour 2017 – Berlin to Copenhagen